Twin Falls First Presbyterian Church has literally grown up with the city of Twin Falls, Idaho, since the township's very beginnings. So we cannot tell the story of one without the other. As the 20th Century began, there was nothing but hot, sagebrush-covered flat desert along the dramatic Snake River Canyon in south central Idaho. A visionary Easterner named I.B. Perrine imagined what irrigation could do for this barren region, and in bringing his vision to life became the father of Twin Falls. The first lots in Twin Falls were sold in 1903, and homesteading plots were soon made available in the outlying areas. People who came to settle this area were men and women of personal strength and strong resolve who planned to make the Twin Falls area their permanent home and sought to build a vibrant, solid community of character for themselves and their children. By the time Perrine and his business partners finished the South Side Canal System on March 1, 1905, Idaho had already been a state for 15 years - and "The Magic Valley" dream was fulfilled, with verdant agricultural land appearing everywhere. The barren desert was forever changed with the gift of water. 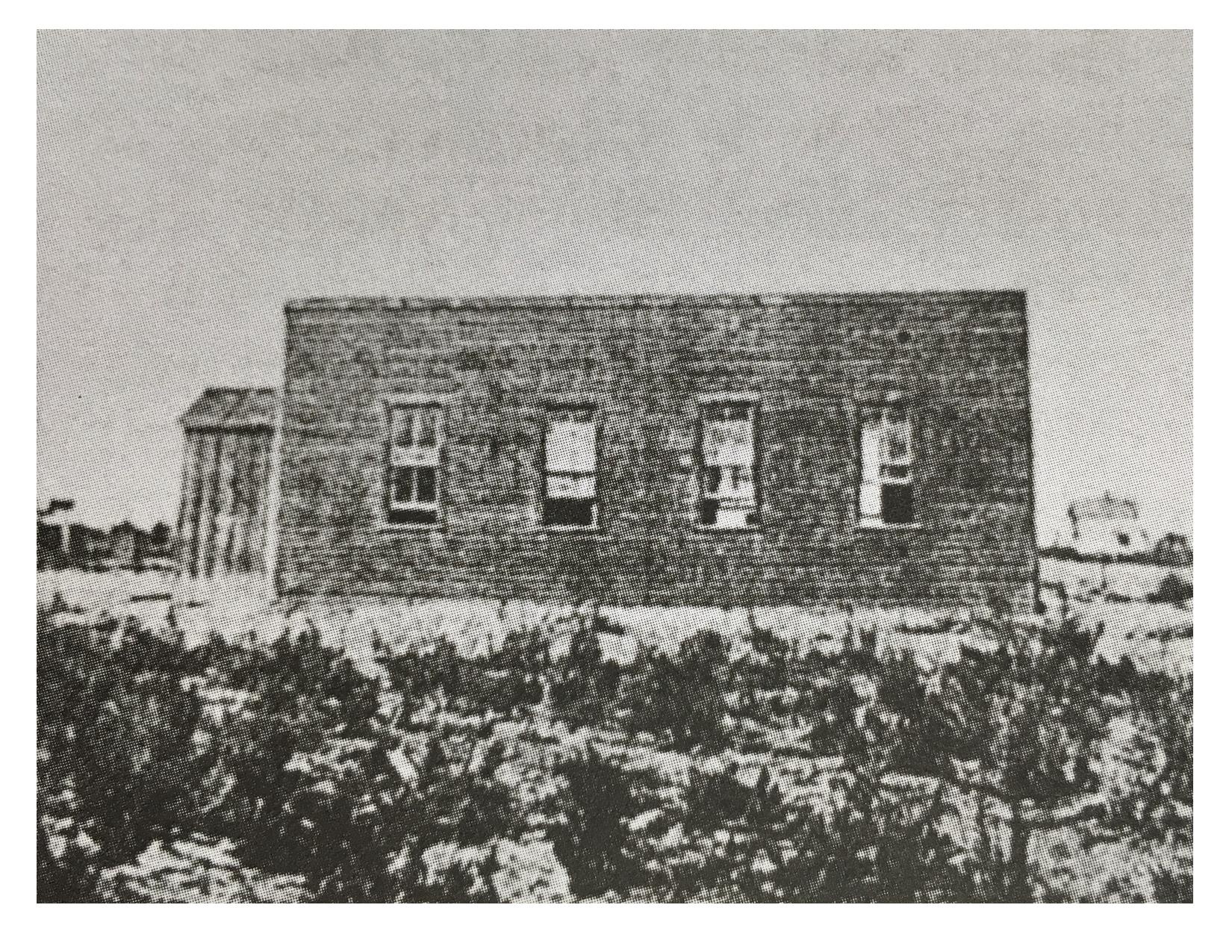 It was July of 1904 when Mrs. Fred Ramsey, a Presbyterian newly arrived in the Magic Valley, decided to organize a community Sabbath School in the Rock Creek Canyon just outside of the present Twin Falls city limits. During the winter of 1904-05, ministers from a variety of denominations traveled across the desert from the railroad town of Shoshone to lead union church services in the canyon. Among those was Reverend J.H. Barton of the Presbyterian Church. Dr. Barton was the Synodical Missionary of Idaho, and he found a group of Presbyterians interested in organizing a church. As a result, on August 17, 1904, the First Presbyterian Church of Twin Falls was organized in the Twin Falls School house, under the Presbytery of Boise.

(Photo at left:  the Twin Falls Schoolhouse at the corner of 3rd Ave. East and 3rd Street (now Idaho Street), where the Presbyterian Church was organized in 1905. This building was shared with the United Methodist Congregation.) 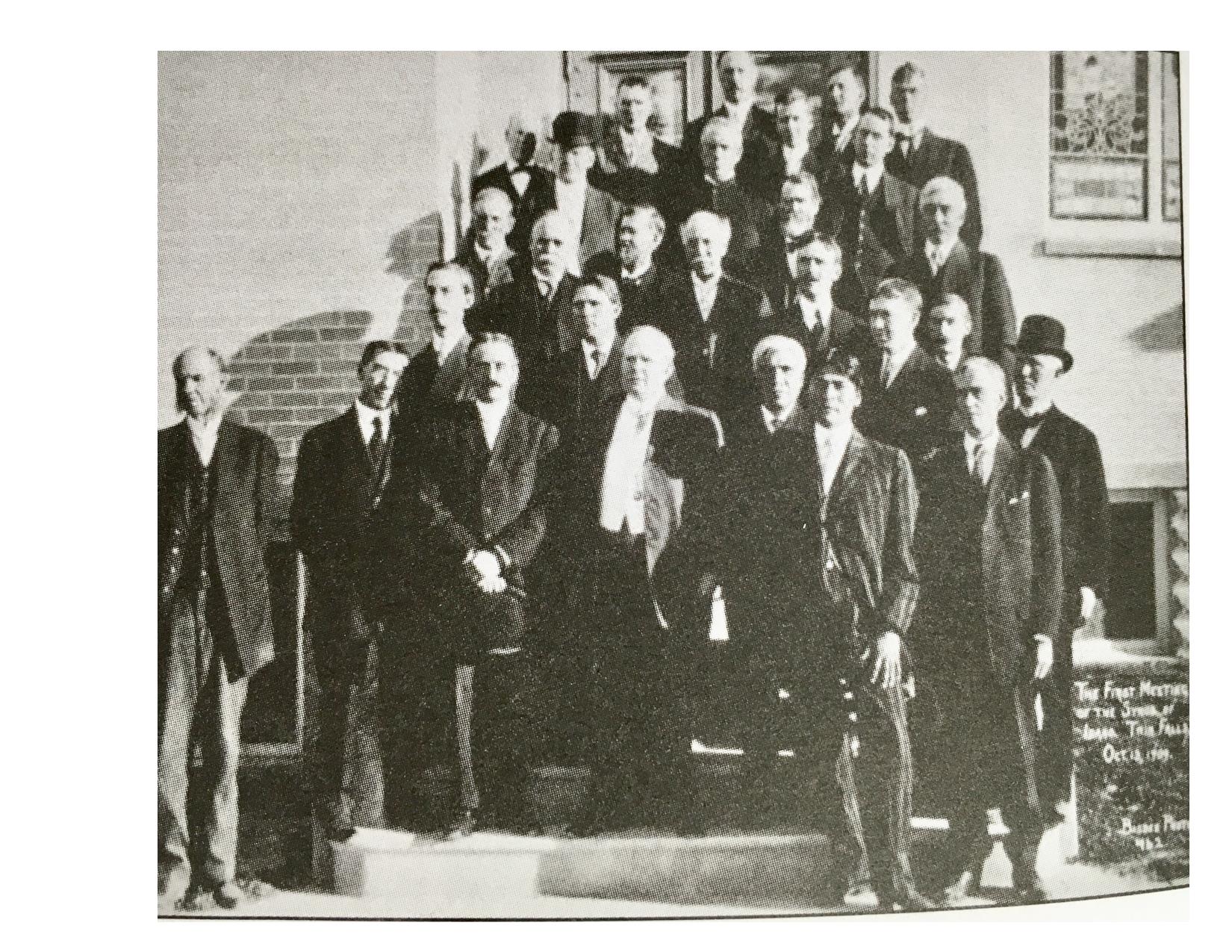 In May 1906, the Reverend John Gourley came from Lancaster, Ohio, to help with the development of the fledgling Presbyterian congregation in Twin Falls. Gourley was installed as pastor of Twin Falls First Presbyterian Church in 1909, and served until his death in 1912. (The photo at left is the First Meeting of the Synod of Idaho in Twin Falls, taken October 13, 1909, by Clarence Bisbee.)

Services were held in various places during those early years of First Presbyterian Church. After the Twin Falls School House (photo above), the congregation met in a room over the Idaho Department Store on Main Avenue before relocating to the Cotillion Hall in the Smith Building on Main Avenue North (now known as The Paris Building). As the congregation continued to grow in size, people began to long for a church building of their own. So in April 1908, they voted to incorporate and build their very first church building at the corner of Fourth Avenue North and Second Street (now Gooding Street), where the building for Title Fact, Inc. is located today. 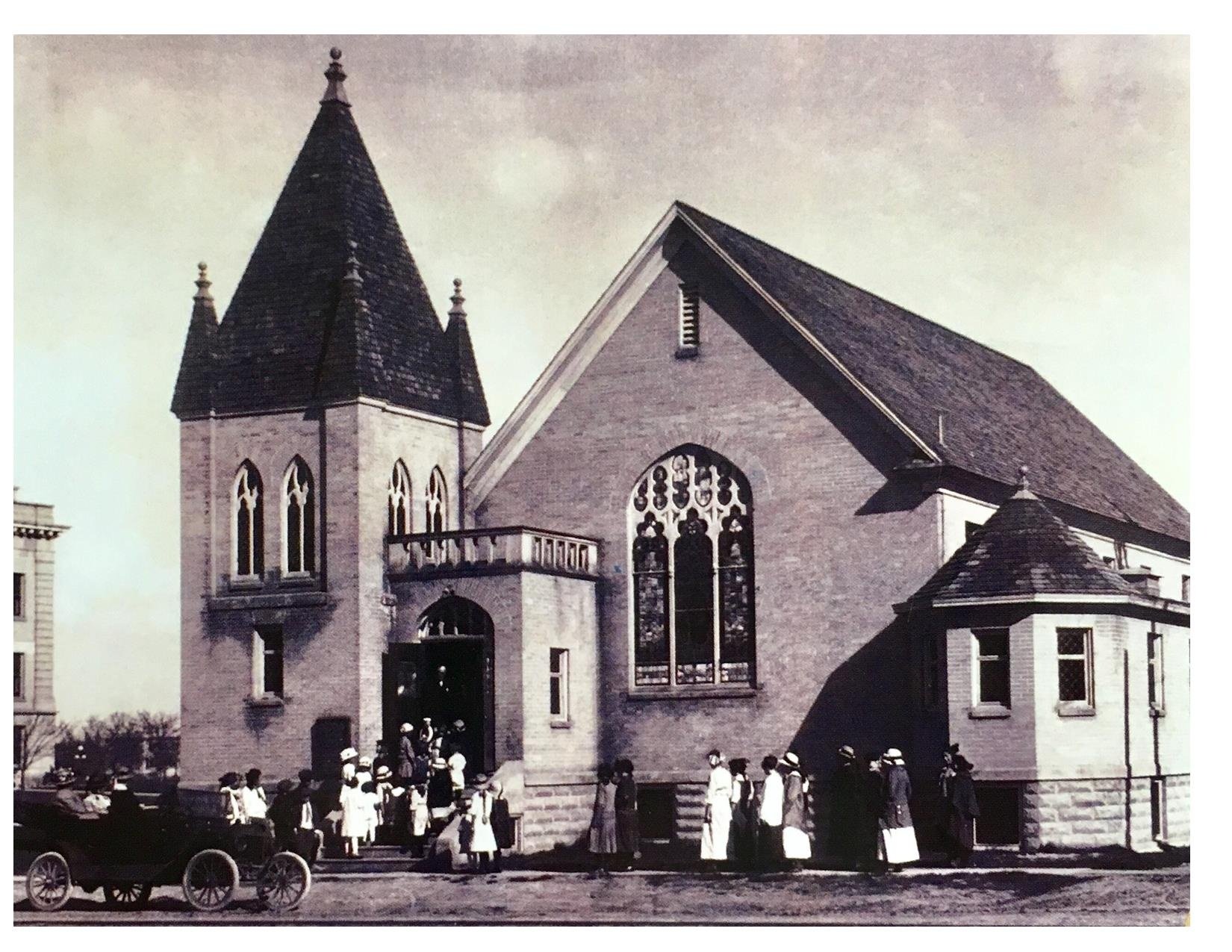 The first church building for Twin Falls First Presbyterian Church (seen at left, with a corner of the Twin Falls County Courthouse barely visible on the far left edge of the image) housed the congregation from 1909 to 1917. The church grew from 30 to 290 members in only a few years under Dr. Gourley's leadership, before he fell ill in 1912. Interim pastor Reverend Joseph M. Anderson filled in for one year before Reverend John F. Shepherd, from Toledo, Ohio, was called as pastor in May of 1913. The church continued to grow. With the great increase in membership, the church outgrew its first building in only eight years, and the need for a larger sanctuary and more Sunday School rooms became imperative. The Presbyterians voted to sell their building to the Baptists, and the current lots on the corner or Fifth Avenue North and Second Street (now Gooding Street) were purchased to build a church that would ultimate serve as home to First Presbyterian Church to this very day.

(As the city of Twin Falls continued to develop, this original church building was moved to the corner of Fifth Avenue East and Idaho Street and today is the home of Rock Creek Community Church.) 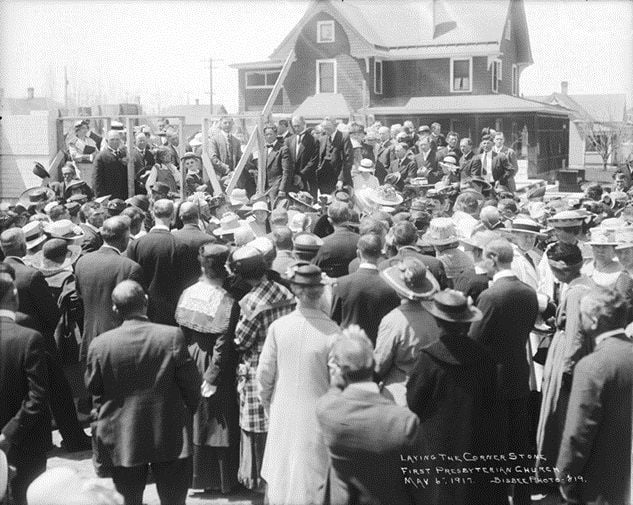 The photo at left shows the groundbreaking/dedication ceremony for Twin Falls First Presbyterian Church's current sanctuary building at the corner of  Fifth Avenue North and Second Street (now Gooding Street) on May 6, 1917. The building was completed in late 1917 and dedicated on January 27, 1918. This new sanctuary could seat 500, which accommodated the congregation size at that time while providing for future growth. This building still houses our sanctuary today.

Gifts in honor of the new 1917 sanctuary included a fine pipe organ, as well as a dramatic stained glass oculus in the center of the high sanctuary ceiling (photos below). The oculus presented by Mr. and Mrs. L.L. Breckenridge in memory of their children, Alice and Kernan. A beautifully designed pulpit was built and presented to the church by W.H. Wild (photo below). Some years later the church was presented with a brilliantly colored stained glass angel window given in memory of Jennings B. Anderson, an uncle to Virginia O'Dell and Judy Scholes (photo below). 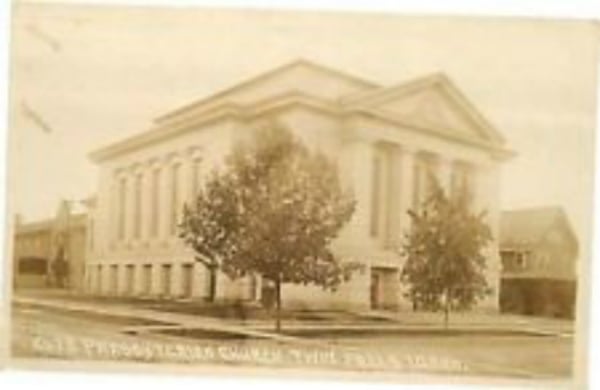 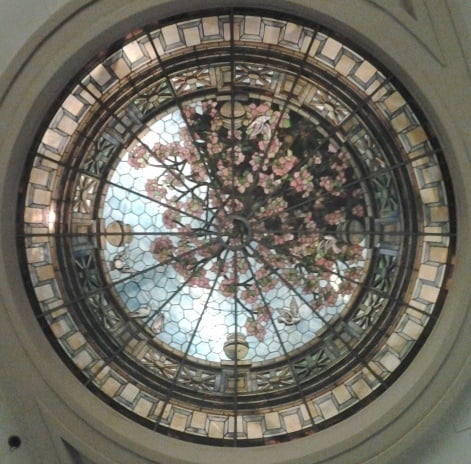 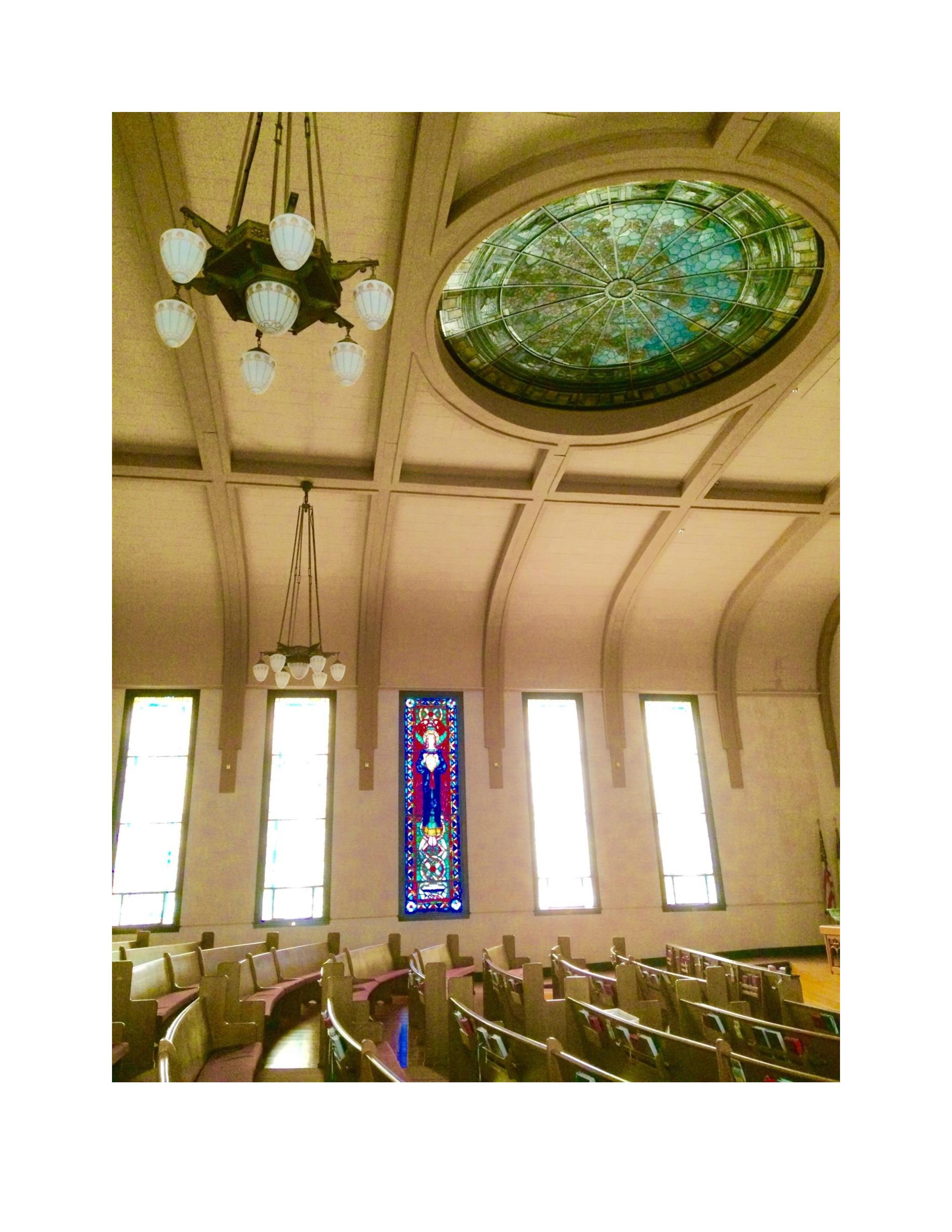 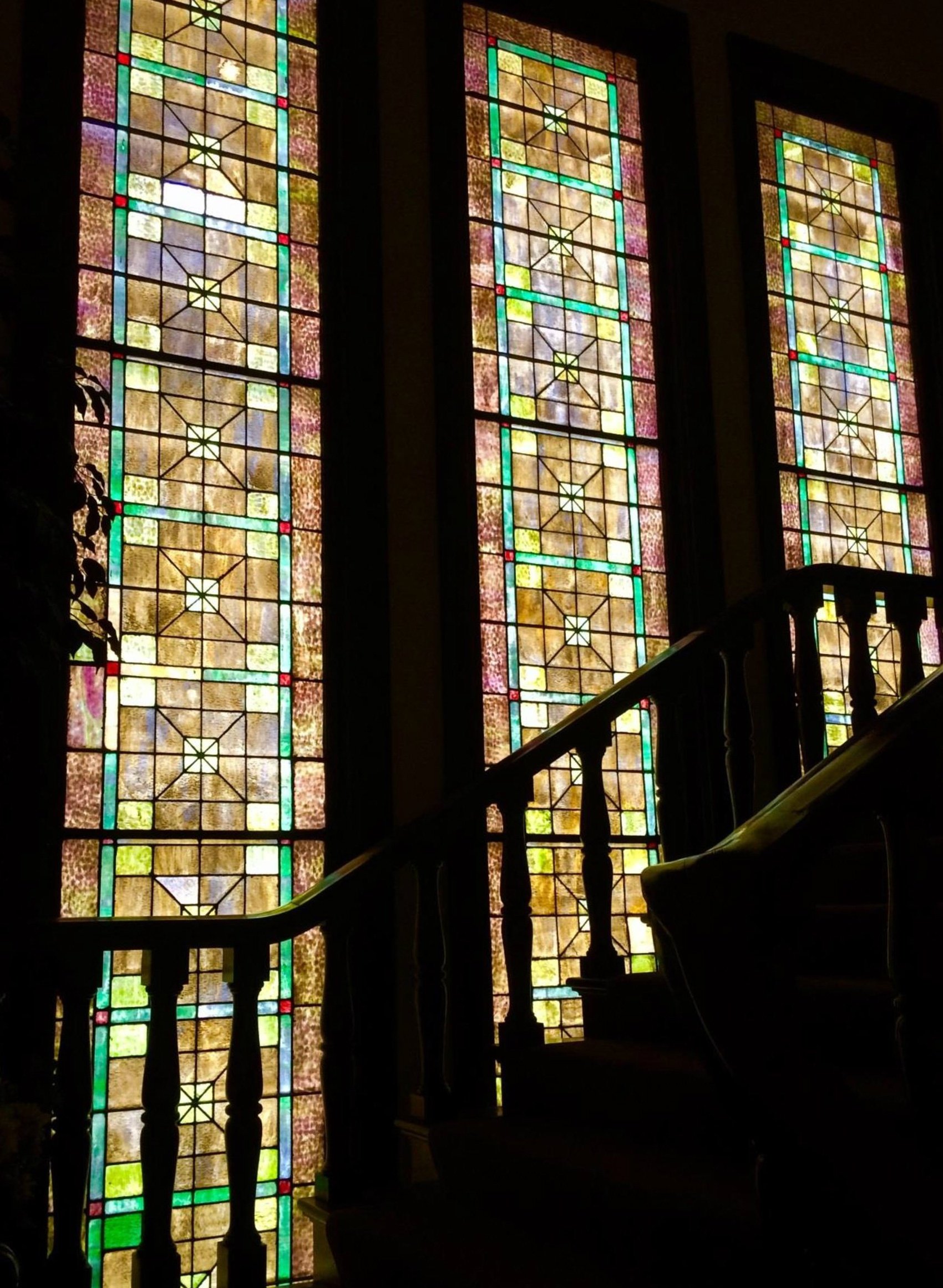 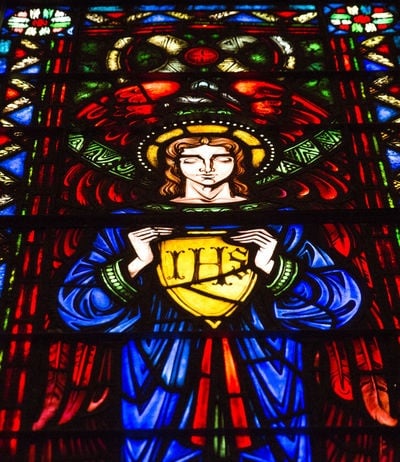 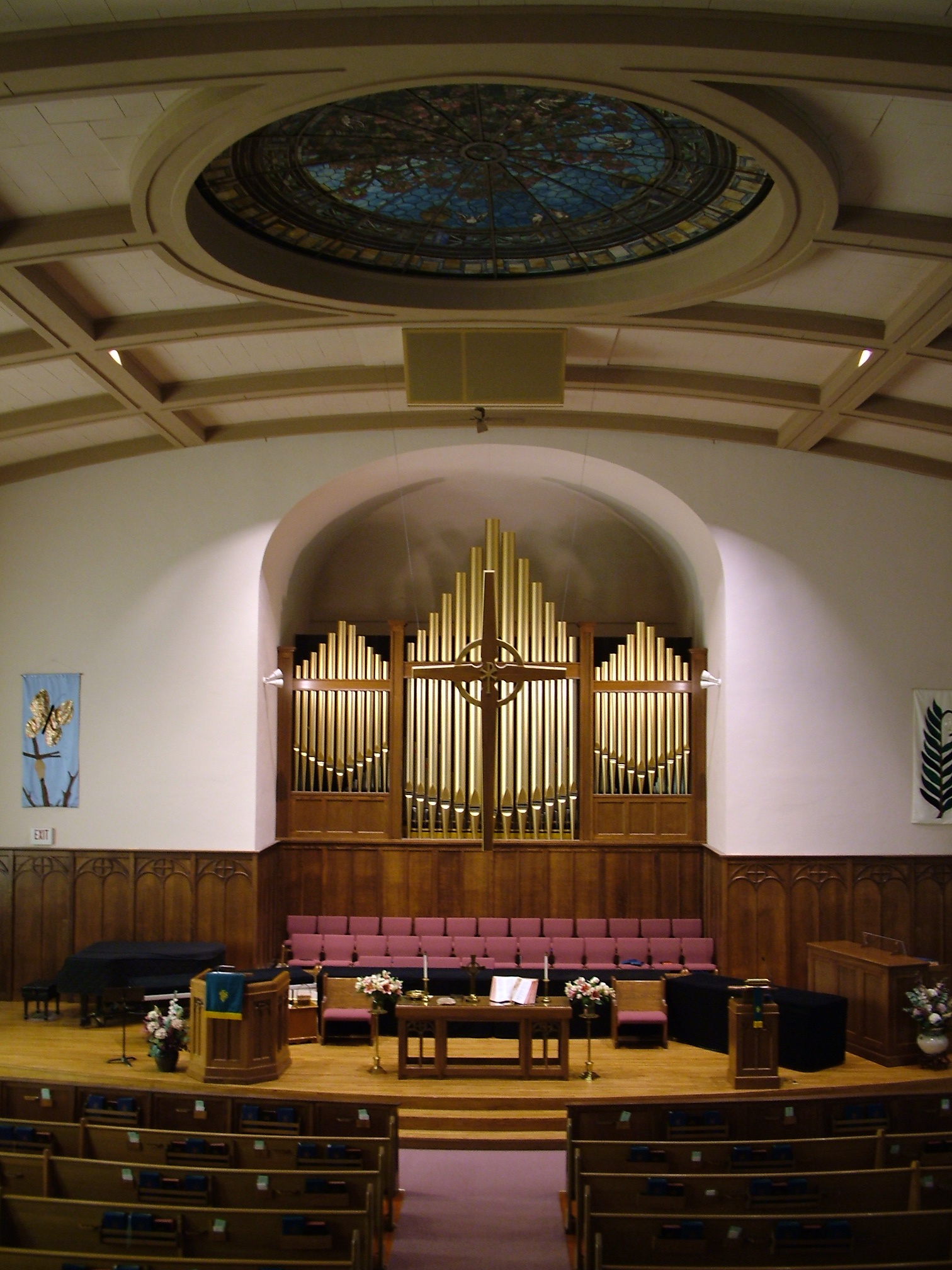 Several pastors served the Twin Falls First Presbyterian Congregation over the course of the next decades. In 1946, concern for the weakening walls of the sanctuary resulted in closure of the building so that a new roof could be constructed, supported by new steel trusses. During a year of renovations, church services and Sunday School were held in the original Twin Falls High School building adjacent to the church at Shoshone Street and Sixth Avenue, next to the Twin Falls County Courthouse. 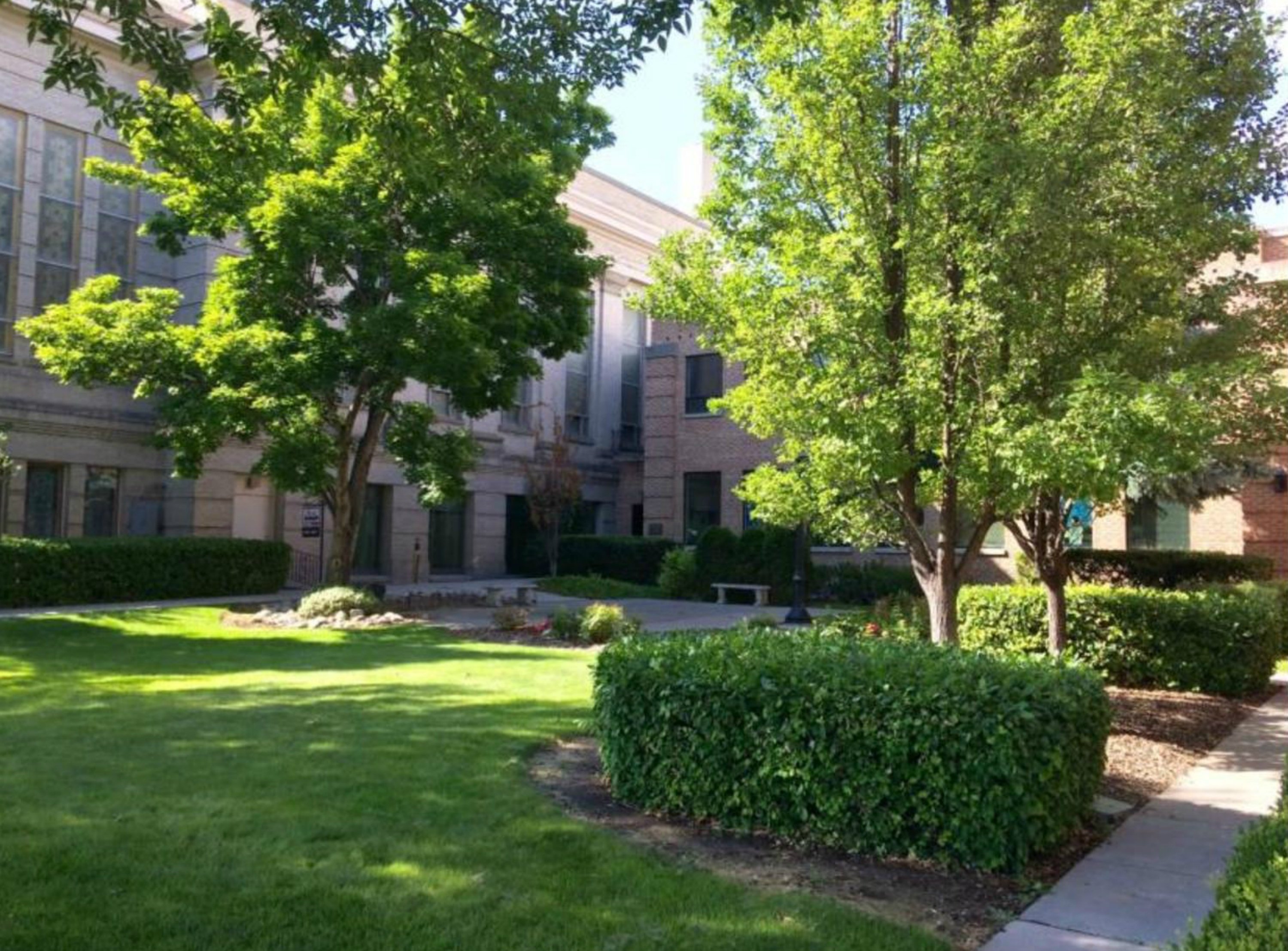 During the tenure of the Reverend Donald Blackstone (1946-1959), it was recognized that one of the great needs of the church was to upgrade facilities in order to carry on the work of the congregation in the community, which would allow the church to continue to grow. After two years of planning, construction of the Education Wing adjacent to the sanctuary to the west began in autumn 1959. This wing includes two floors with classrooms of varying sizes, a nursery, library and office space, and a small chapel.

The 50th Anniversary of the church was celebrated in 1955 with considerable fanfare, with membership rolls at 1,050. In honor of the 50th Anniversary, the first two octaves of White Chapel hand bells were purchased and the Hallelujah Handbells! Bell Choir that is still in existence today was launched. 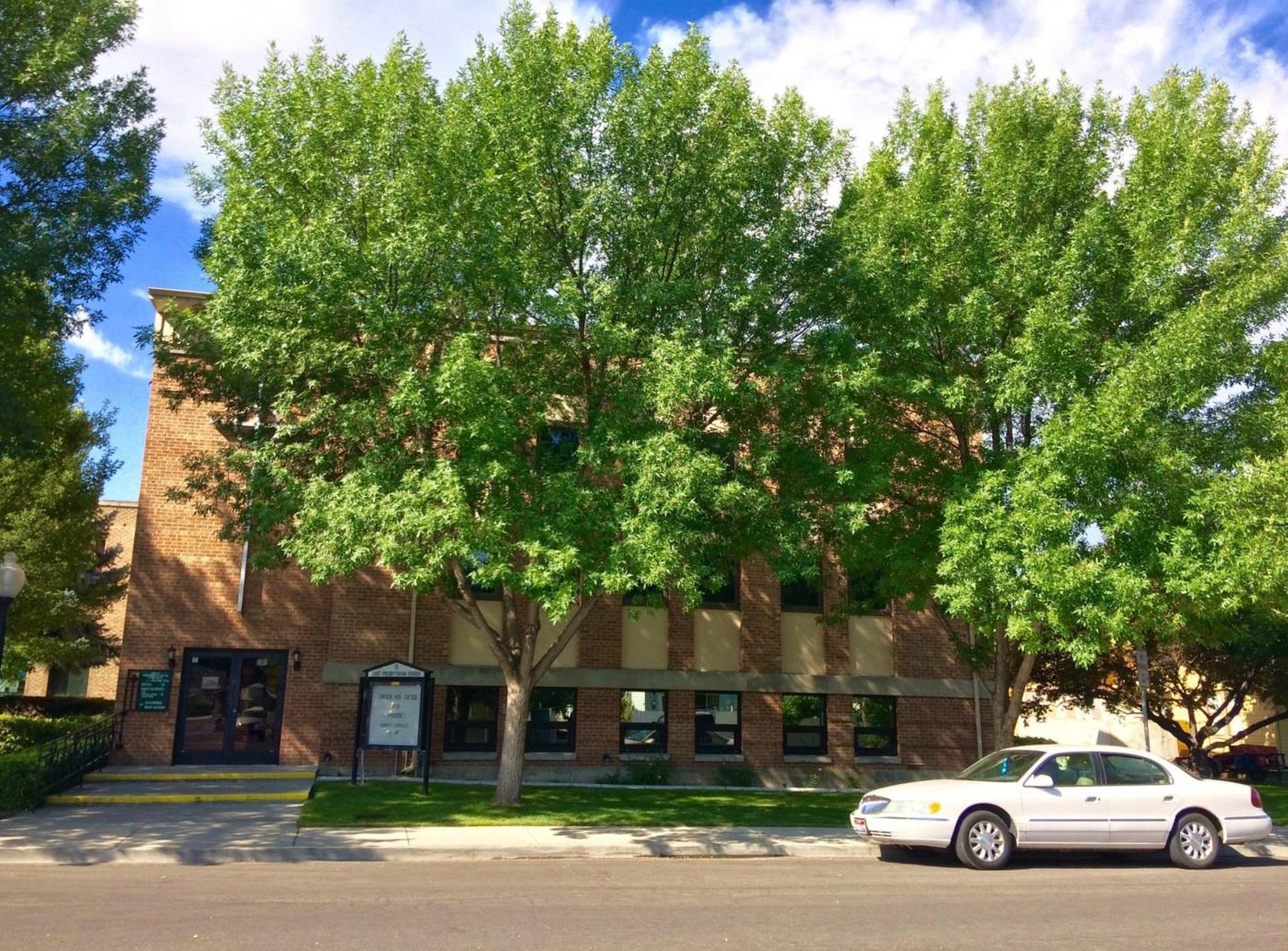 Dedication of the third and final phase of the current church building occurred on October 23, 1960. This final addition contains a gymnasium, classrooms, offices for the pastor and church secretary, third floor space that housed Boys Scout Troop 66, and a gathering space known as The Fireside Lounge (with small kitchen), and third floor space that housed Boy Scout Troop 66 from 1960 until 2005. (The first Boy Scout troop at First Presbyterian Church was actually established in 1913.0

On March 3, 1978, the sanctuary building at the corner of Fifth Avenue North and Second Street North (now Gooding Street) was officially placed on The National Register of Historic Places.

The most recent redecoration of the sanctuary occurred in 1980, during a period of time when two worship services were held to accommodate the burgeoning Presbyterian congregation - at 9:30 am and 11:00 am. 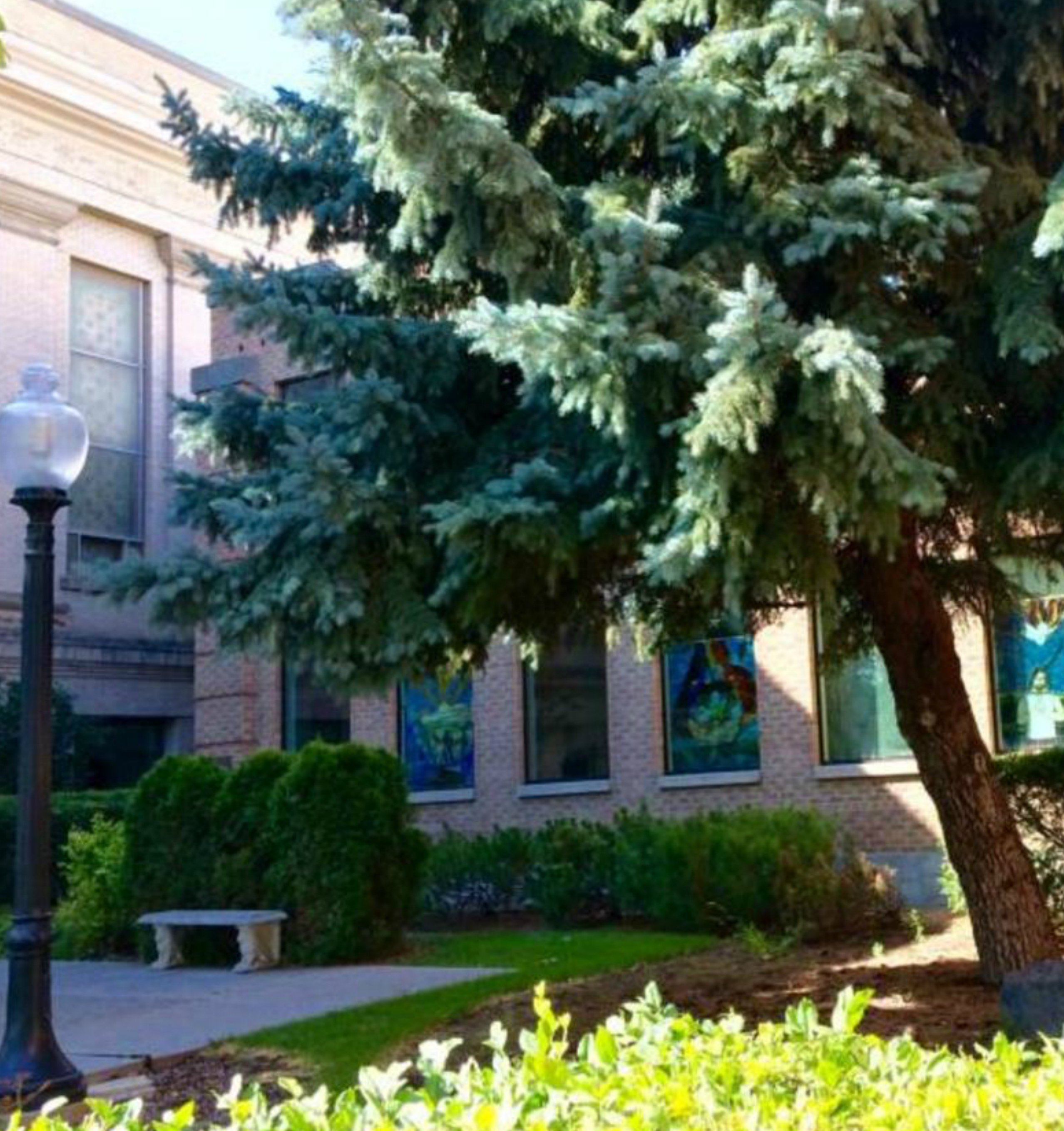 The Kroll Memorial Courtyard in the courtyard area between the original sanctuary and the gymnasium/office portion of the building was built and dedicated to Egon Kroll in 1986, a loving gift to the church from his widow Peggy Kroll. It is a wonderful space for meditation, intimate acoustic music gatherings, small group picnics, and more. With a cemented courtyard area central to its design, there is also adequate grassy space, a rose garden, well-established trees, and lovely landscaping.

The Kroll Courtyard also includes a lamp post In Memory of Sharon and Virginue Albertson and wrought iron railing that was a gift from The Reverend Donald Blackstone.

Marty Mead added a chokecherry tree, brick walkway, and gardens that will bloom throughout the spring, summer and autumn to the Kroll Courtyard Garden in spring 2018 in memory of her late husband, Dr. David Mead.

A faith community seeking to be
a living example of God's love in the world.

Join us for worship services every Sunday morning at 10:00 a.m.
You are welcome here!